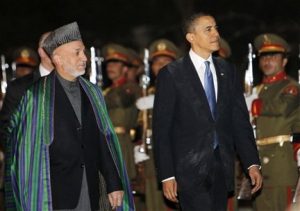 Once again the Magician has waived his green cape and dazzled the international donors who are paying for the war they are waging in Afghanistan to keep him in power. A donors conference was held in Kabul on July 20, 2010, launching “the Kabul process”.

See Nipa Banerjee, “Too many conferences, too few results in Afghanistan,” The Ottowa Citizen, July 22, 2010; and
Editorial, The Salt Lake Tribune, July 22, 2010

The last time the donors met was at the London conference in January, where after committing massive corruption in the first round presidential elections in August 2009, and refusing to replace the members of the Independent Electoral Commission who were directly responsible for certifying that fraud, the Magician dazzled the internationals with his talk of re-integration of the Taliban.

Exactly nothing, or at least nothing desirable, has come of that talk of re-integration. But because the U.S. and its allies can see no way out of Afghanistan, they long for a magical ending.

In London, the Magician succeeded in changing the subject, with the question of free and fair elections receding to something like the 25th goal in the final communiqué of the conference.

One has to marvel at such legerdemain, even if the objects of manipulation are incredibly easy targets. Among them all there does not seem to be more than six months of collective memory. None of them seem to recall the nine years of empty promises the Magician has plied them with, telling each of them exactly what they wanted to hear at exactly the right moment.

While the Magician promised to clean up the corruption in his government, the level of corruption doubled between 2007 and 2010.

While the Magician promised to build up good governance and the national police, he recently replaced Hamid Atmar, the Minister of the Interior in charge of the national police, one of a handful of Afghan ministers the U.S. and its allies believed to be highly competent. Another, Amrullah Saleh, the head of Afghan intelligence, was fired at the same time. Both were former officials of the Northern Alliance, and were apparently fired to satisfy Pakistani demands.

Nonetheless, year in, year out, the internationals are enthralled by the latest spell cast upon them by the Magician, for it contains exactly what they want to hear.

The magic is powerful. Its spell enables the internationals to believe that they can negotiate a victory with the Taliban and other insurgent groups, precisely when the latter have the momentum, and believe they must only wait for the Americans and their allies to withdraw to claim victory.

The Magician’s powers of persuasion are so great that he even convinced the donors to channel 50% of their financial support directly to him and the central government. Given his government’s record of corruption, that was a magical achievement in and of itself, of stupendous proportions.

Let us hope there is a magical ending in Afghanistan that allows NATO troops to withdraw. For otherwise, with more waves of the Magician’s green cape and whatever promises the allies may wish or need to hear, it looks like a long, hard slog, with neither good governance nor victory in sight.

Comments are invited. Please add to the discussion and tell the Observer why he is wrong. Or right. Or some of one and some of the other.