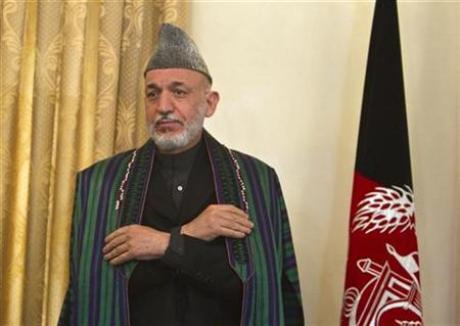 After Hamid Karzai intervened to thwart the investigation and arrest of some of his top officials, including Mohammed Zia Salehi, a top security adviser, President Obama held several meetings with his top National Security staff.  Karzai had blocked the work of two special anti-corruption units that had been established with the support and close assistance of U.S. officials, and fired Deputy Attorney General Fazel Ahmad Faqiryar, who had overseen their activities.

At the close of one meeting on September 14, at the peak of the crisis caused by Karzai’s actions, Obama gave instructions to the relevant agencies to go back and come up with “more sophisticated options”.  See Mark Mazzetti and Rod Norland, “U.S. Debates Karzai’s Place in Fighting Corruption,” New York Times, September 14, 2010.

These reportedly included a strategy to go after small-scale corruption by Afghan officials, while ignoring the massive corruption led by Karzai and his associates at the top levels of the Afghan government. See The Trenchant Observer, “Fighting corruption and other challenges in Dexter Filkins’ Corrupt-istan,” September 18, 2010.

Bags of cash from Iran

Since that time, it has been reported that Iran has for several years routinely shipped millions of dollars in cash to high officials in the Afghan government. See Dexter Filkins, “Iran Is Said to Give Top Karzai Aide Cash by the Bagful,” New York Times, October 23, 2010.

At a news conference on October 25, Karzai confirmed these cash payments from Iran, stating,

“They do give us bags of money — yes, yes, it is done,” Mr. Karzai said, responding to questions about a report in The New York Times on Sunday that Iran sends regular cash payments to his chief of staff, Umar Daudzai. “We are grateful to the Iranians for this.”

“Patriotism has a price,” he said.

To be sure, earlier reports revealed that the C.I.A. had been making payments to a large number of Afghan officials for years.

What was perhaps more shocking were other statements made by Karzai at the October 25 news conference. Again, without evidence, he charged American security contractors with being behind a large number of attacks on the Afghan population, insisting on a December deadline for the withdrawal of foreign security contractors–with important exceptions. The latter include, presumably, his own security detail.

During an often hostile news conference, Mr. Karzai also accused the United States of financing the “killing” of Afghans by paying private security contractors to guard construction projects and convoys in Afghanistan. He has declined to postpone a December deadline he set for ending the use of private security forces despite urgent pleas from Western organizations, including development organizations, that need protection here.
…
The private security companies, many of which are paid for by the United States, are spreading chaos and unjustly killing Afghan civilians, Mr. Karzai said.

“The money dealing with the private security companies starts in the hallways of the U.S. government,” he said. “Then they send the money for killing here.”

Under a decree he issued in August, all private security firms must stop operations by Dec. 17. The United States and other Western governments here say they accept the ban, and they are trying to switch to the use of the Afghan police and soldiers to protect their military convoys…

They have asked for additional time to make the change, especially for civilian development organizations (which) say they will not be able to continue work without security for employees…

The Afghan president said security companies were responsible for a litany of bloody crimes against the country’s people. “When this money comes to Afghanistan, it causes insecurity in Afghan homes and causes the killing of Afghan children and causes explosions and terrorism in Afghanistan,” Mr. Karzai said.

He leveled several accusations against Western interests in Afghanistan and the news media, even going so far as to say that the security companies were interchangeable with the Taliban.

“In fact we don’t know how many of the explosions are the fault of the Taliban and how much by them,” said Mr. Karzai, referring to the security companies.

Three additional aspects of the security contractors issue are important, but have received relatively little attention in the press. First, if the ban on private security contractors stands, the billions of U.S. dollars now spent on providing personal security for U.S. civilian workers and contractors would presumably be funneled through the Afghan government. This would provide enormous and new sources of revenue to Afghan officials through graft and corruption, while enabling Karzai to strengthen his hold on power through his patronage networks.

Second, and more critical in terms of the U.S. military campaign and strategy, transferring this security function to Afghans would draw police and army personnel away from the urgent task of holding territory that has been cleared of the Taliban.

A final point is that Afghan army and police officials, many of whom are illiterate, are hardly likely to be able to provide the sophisticated security protection they would be replacing. As a result, the civilian side of the U.S. strategy in Afghanistan could collapse.

Senator John McCain, an Arizona Republican and former presidential candidate, said the members of the delegation planned to forcefully raise the issue of corruption with Mr. Karzai. “We will bring up a couple of recent events that are very disturbing,” Mr. McCain said. He did not elaborate, but on Monday, Afghan officials said that corruption charges had been dropped against a Karzai aide, Mohammed Zia Salehi.

Mr. Karzai had intervened to have Mr. Salehi released from prison after he was arrested by an antigraft unit in late July. The case was embarrassing to the Americans, however, as it emerged that Mr. Salehi had been on the payroll of the Central Intelligence Agency.

They also appear to include maintaining a “radio silence” regarding the massive fraud in the National Assembly elections held on September 18. One of Karzai’s ministers, Ismail Khan, was allegedly caught on tape directing part of the fraud. The tape has been played on Afghan television.

Nonetheless, the U.S. and its allies have been unwilling to question the election results.

A protracted political fight over the legitimacy of the elections is something U.S. and NATO officials are trying to avoid. As they prepare to make their case for progress in the Afghan war at a summit in Lisbon and a December review in the United States, they have said the allegations lack evidence.
–Joshua Partlow, Audio files raise new questions about Afghan elections,”Washington Post, November 11, 2010.

A Primary Obstacle to “Good Governance” in Afghanistan

It is apparent that a primary obstacle to providing the “good governance” required to avoid a collapse of the government in Afghanistan is Hamid Karzai. Bearing in mind that he assumed the office of president only as the result of massive fraud which he himself apparently orchestrated, he cannot properly be viewed as the elected and legitimate president of Afghanistan.

It is time for the U.S. to start developing a Plan B, which would involve the early departure of Hamid Karzai from Afghanistan. As noted earlier,

What Obama needs to do is to take the bull by the horns, and start exploring options for the early departure of Hamid Karzai. This will be a monumentally challenging task. So was D-Day in World War II.

A starting point might be for the U.S. Congress to pass a law providing that no U.S. funds or personnel could be used to fund Hamid Karzai’s security detail. This prohibition could be lifted only when restrictions by the Afghan government on the use of private security contractors in Afghanistan had been revoked.

When someone like Karzai persistently directs lies and insults against you, while you are funding the very security that enables him to stay in power, you must either stand up and burst the bonds of a dependent and abusive relationship, or suffer the consequences of being a wimp.

In this case, the consequences of being a wimp are likely to be the continued loss of American and Allied lives and treasure, to no avail, and eventually the collapse of the Afghan government.

Our Dimming Vision of World Affairs