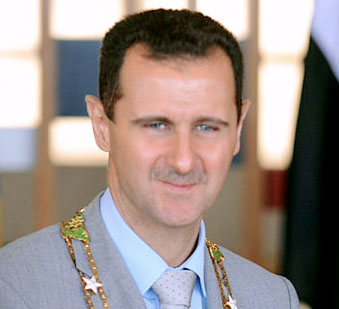 The Arab League “deal” with Syria looks increasingly like the African Union peace efforts aimed at blocking Security Council action in Libya. Fortunately, NATO and the international community were not fooled by those maneuvers, and acted decisively in Libya to protect the civilian population “by all necessary measures”.

The current presence of Arab League monitors in Syria, headed by a former Sudanese official whose appointment itself calls into question the objectivity of their mission, compounded by absurd statements about normality when all hell is breaking loose right in their face, underlines the great urgency of the U.N. Security Council assuming–now– a decisive role in bringing the commission of war crimes and crimes against humanity by Basar al Assad to a halt.

Syria should be debated in the Security Council, and if the authoritarian Russian government of Mededev-Putin wishes to defend Bashar al Assad’s massacres and use of force against civilians, let them do so publicly. Let Putin run for President of Russia on a record of defending the war criminals who lead Syria.

A resolution should be presented to the Security Council that would give the International Criminal Court a mandate to immediately investigate war crimes and crimes against humanity committed by the al Assad government, from the date of the first protests in the spring. This resolution should be brought to a public vote.

The Syrian situation, in which the international community has stood aside while unspeakable crimes are committed by government forces, every day, is throwing the whole region into chaos, as Egyptian government forces’ moves to shut down pro-democracy NGOs on December 29 suggest.

At the very least the International Criminal Court should be given a mandate now, while the Security Council remains seized of the situation in Syria and explores other means to bring the violence in Syria against civilians to a prompt halt.

Let the Russians show their hand in blocking Security Council action, if they have no shame.

President Obama’s leadership is needed. Lebanon, Syria, Iran, and even Iraq are all directly at issue. What is done or not done in Syria will affect developments in each of these countries, and in other countries from Egypt to Yemen.

A repetition of Obama’s debacle of inaction, hesitation and delay in Libya could have disastrous consequences not only in Syria but throughout the region.

It is time for the Security Council to act, now, to give the ICC the mandate discussed above. Everyone should focus on this immediate objective, while preparing for stronger action to force al Assad to halt his terror.

Repression in Syria, and the spread of universal ideals throughout the world, May 11, 2011

“The emperor has no clothes”: Foreign policy without a moral core—Obama’s Debacle in Syria — Update #19 (March 29)

Samantha Power on Syria: Former Obama officials still downplay the use of force

Use international law: Take Putin’s threatened invasion of Ukraine to the U.N. Security Council and the General Assembly; use SWIFT and Nordstream II to move beyond an illusory deterrent and really deter Putin; sanction Belarus for complicity in any invasion

The faces of Genocide at Srebrenice