The February 4, 2012 UN Security Council Vote on the Draft Resolution on Syria

On February 4, 2012, the United Nations Security Council reached an impasse on Syria, with China and Russia each casting a blocking veto against a draft resolution which supported the Arab League’s actions and decision of January 22, 2012 calling for a peaceful transition in Syria.  It also demanded that the Syrian government immediately cease its crimes against the civilian population. The other 13 members of the Security Council voted in favor of the resolution.  Given the statements made about the resolution by representatives of both China and Russia, the actual text of the resolution merits close examination.  It is reproduced below.

For the UN video of the February 4, 2012 Security Council debate and vote on the draft resolution on Syria (reproduced below), see United Nations Webcast (Video on Demand), “Vote – Security Council Meeting on Syria 04 February 2012”.

A press release summarizing the statements of the different delegations is found here.

The provisional transcript in English of the full meeting including all comments (United Nations Doc. S/PV.6711) is found here.

Statements of Russia and China

In addition to the 15 members of the Security Council, in accordance with its procedures the following countries were also invited to participate in the meeting:

The debate in the Security Council makes fascinating reading (or listening), and sheds much light on the background to the situation in Syria and the failure to cooperate with peace initiatives on the part of the Bashar al-Assad government, which has a history of making wonderful promises while continuing its bloody represssion against its people on the ground.

All of the interventions are of interest, but those of China and Russia are particularly revealing, in view of the fact that they had blocked effective Security Council action for many months, and in view of the thin rationales put forward for their vetoes of the draft resolution. Summaries of their statements from the U.N. Press release follow: VITALY CHURKIN ( Russian Federation) said the bloodshed and violence in Syria must be ended immediately, adding that his country was taking direct action and planned to hold a meeting with President Bashar al-Assad on 7 February. While the Russian Federation was committed to finding a solution to the crisis, some influential members of the international community had been undermining the possibility of a peaceful settlement by advocating a change of regime. The draft resolution voted down today sought to send an “unbalanced” message to Syria, he said, adding that it did not accurately reflect the situation there. No proposal had been made to end attacks by armed groups, or their association with extremists, he said, adding that his delegation had, therefore, voted against the text. The Russian Federation greatly regretted the results of the Council’s joint work, and hoped that a successful Syrian political process would take place, he said, emphasizing that the Russian Federation would continue to work towards that goal. 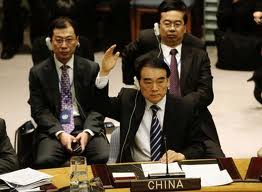 LI BAODONG ( China), also calling for an immediate end to all violence in Syria, asked for the respect of the Syrian people for a reform process that was in their own interest. China supported the Arab League’s “good office” efforts to restore stability in Syria, he said, adding that the international community should provide “constructive assistance” to achieve that goal. However, the country’s sovereignty, independence and territorial integrity must be respected, he emphasized. The purposes and principles of the United Nations Charter must be respected, he added, citing the need to promote political dialogue and to defuse disputes “rather than complicate the issue”. China had played an active part in the negotiations on the draft, and maintained that, under the current circumstances, placing “undue emphasis” on pressuring the Syrian Government would not help to resolve the crisis, but would further complicate the situation, he said. China supported the amendments to the text proposed by the Russian Federation, and noted that the latter would meet with the President of Syria next week. Pushing through a draft resolution while members of the Council were still “seriously divided” over the issue would not help to resolve it, he stressed, adding that it was in that context that China had voted against the text. Nonetheless, it would continue to work with the international community towards an appropriate end to the crisis, he said.

Obviously, in the views of the other 13 members of the Security Council, it was time to act. Those voting in favor of the resolution included the following members:

The Text of the Draft Resolution

Recalling its presidential statement of 3 August 2011,

Noting the League of Arab States’ request in its decision of 22 January 2012,

Welcoming the League of Arab States’ Action Plan of 2 November 2011 and its subsequent decisions, including its decision of 22 January 2012, which aims to achieve a peaceful resolution of the crisis,

Underscoring the importance of ensuring the voluntary return of refugees and internally displaced persons to their homes in safety and with dignity,

Noting the announced commitments by the Syrian authorities to reform, and regretting the lack of progress in implementation,

Reaffirming its strong commitment to the sovereignty, independence, unity and territorial integrity of Syria, emphasizing its intention to resolve the current political crisis in Syria peacefully, and noting that nothing in this resolution authorizes measures under Article 42 of the Charter,

Welcoming the engagement of the Secretary-General and all diplomatic efforts aimed at addressing the situation, and noting in this regard the offer of the Russian Federation to host a meeting in Moscow, in consultation with the League of Arab States,

1. Condemns the continued widespread and gross violations of human rights and fundamental freedoms by the Syrian authorities, such as the use of force against civilians, arbitrary executions, killing and persecution of protestors and members of the media, arbitrary detention, enforced disappearances, interference with access to medical treatment, torture, sexual violence, and ill-treatment, including against children;

2. Demands that the Syrian government immediately put an end to all human rights violations and attacks against those exercising their rights to freedom of expression, peaceful assembly and association, protect its population, fully comply with its obligations under applicable international law and fully implement Human Rights Council resolutions S-16/1, S-17/1, S-18/1 and General Assembly resolution A/RES/66/176;

3. Condemns all violence, irrespective of where it comes from, and in this regard demands that all parties in Syria, including armed groups, immediately stop all violence or reprisals, including attacks against State institutions, in accordance with the League of Arab States’ initiative;

4. Recalls that all those responsible for human rights violations, including acts of violence, must be held accountable;

5. Demands that the Syrian government, in accordance with the Plan of Action of the League of Arab States of 2 November 2011 and its decision of 22 January 2012, without delay:

(a) cease all violence and protect its population;
(b) release all persons detained arbitrarily due to the recent incidents;
(c) withdraw all Syrian military and armed forces from cities and towns, and return them to their original home barracks;
(d) guarantee the freedom of peaceful demonstrations;
(e) allow full and unhindered access and movement for all relevant League of Arab States’ institutions and Arab and international media in all parts of Syria to determine the truth about the situation on the ground and monitor the incidents taking place; and
(f) allow full and unhindered access to the League of Arab States’ observer mission;

6. Calls for an inclusive Syrian-led political process conducted in an environment free from violence, fear, intimidation and extremism, and aimed at effectively addressing the legitimate aspirations and concerns of Syria’s people, without prejudging the outcome;

8. Encourages the League of Arab States to continue its efforts in cooperation with all Syrian stakeholders;

9. Calls upon the Syrian authorities, in the event of a resumption of the observer mission, to cooperate fully with the League of Arab States’ observer mission, in accordance with the League of Arabs States’ Protocol of 19 December 2011, including through granting full and unhindered access and freedom of movement to the observers, facilitating the entry of technical equipment necessary for the mission, guaranteeing the mission’s right to interview, freely or in private, any individual and guaranteeing also not to punish, harass, or retaliate against, any person who has cooperated with the mission;

10. Stresses the need for all to provide all necessary assistance to the mission in accordance with the League of Arab States’ Protocol of 19 December 2011 and its decision of 22 January 2012;

11. Demands that the Syrian authorities cooperate fully with the Office of the High Commissioner for Human Rights and with the Commission of Inquiry dispatched by the Human Rights Council, including by granting it full and unimpeded access to the country;

12. Calls upon the Syrian authorities to allow safe and unhindered access for humanitarian assistance in order to ensure the delivery of humanitarian aid to persons in need of assistance;

13. Welcomes the Secretary-General’s efforts to provide support to the League of Arab States, including its observer mission, in promoting a peaceful solution to the Syrian crisis;

14. Requests the Secretary-General to report on the implementation of this resolution, in consultation with the League of Arab States, within 21 days after its adoption and to report every 30 days thereafter;

15. Decides to review implementation of this resolution within 21 days and, in the event of non-compliance, to consider further measures;

16. Decides to remain actively seized of the matter.

With dozens and even hundreds of people being killed every day in Syria, China and Russia blocked the collective will of the 13 remaining members of the Security Council to pass–finally–a draft resolution which which had some hope of reducing the killing in Syria. The resolution backed the Arab League plan adopted on January 22, 2012 after months of delay and non-compliance with earlier agreements, and the bitter experience of Arab League monitors on the ground in Syria. During their presence, the al-Assad regime made no serious and sustained effort to comply with his agreement with the Arab League which was the basis for their presence in Syria. The Arab League monitor plan was a final attempt by the Arab League to give the Syrian regime yet another chance before implementing the adoption of economic sanctions.

The draft resolution did not authorize, and could not be used to authorize, military action, as was made explicit by the reference to Article 42 of the Charter.

After months of negotiations and delay, during which Russia and China steadfastly opposed effective action by the Security Council, they vetoed a fairly mild resolution–given the circumstances on the ground–supporting the Arab League plan. Their arguments for opposing the resolution were rejected by the remaining 13 members of the Council, which included countries from all parts of the world.

Monumental miscalculation? Russia’s strategic interests in Syria and its defense of the al-Assad regime
February 2, 2012

For other earlier aticles on Syria, please use the Search Box on the main page which, if you are not already there, can be accessed by clicking on “The Trenchant Observer” at the top of this page.

Garzon’s Accusers are Accused: Abuse of Judicial Power in Garzón Case is Stain on Spanish Judiciary

“By all necessary means”: Syria is closer than you think, and the hour is late—Obama’s debacle in Syria — Update #25 (April 9)