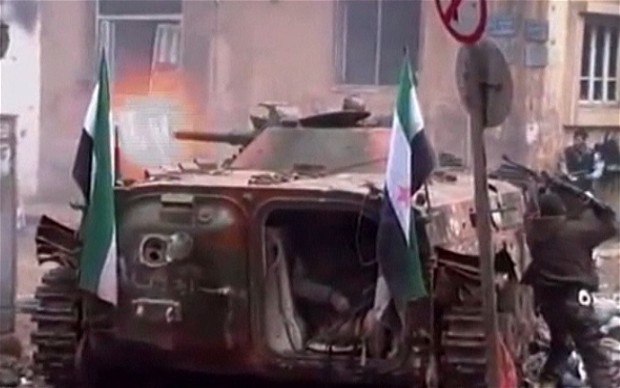 “So, is the world helpless? Must we simply stand by and watch the slaughter, and accept a future world where we are comfortable with the commission of war crimes and crimes against humanity, because we don’t have the will and the courage to use military force to stop it?”

Mediation with war criminals during ongoing commission of war crimes? 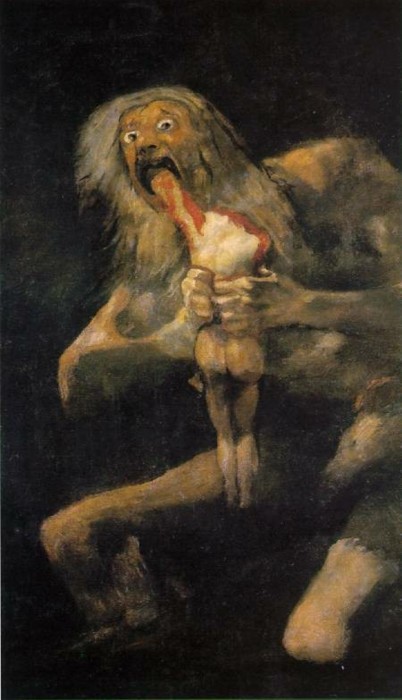 Look carefully at Goya’s painting of Saturn devouring his son. Feel the horror. That is the horror that exists today in Syria.

The Future for Opponents of the Al-Assad Regime 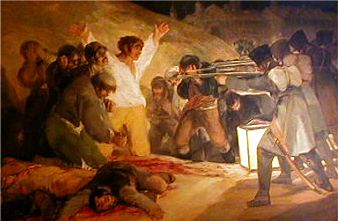 The commission of crimes against humanity, war crimes, and other grave violations of fundamental human rights continues in Homs and other cities and towns in Syria. See

Report of the Human Rights Council’s Commission of Inquiry on Syria, February 22, 2012.

For the full text of the 72-page report, see “Report of the independent international commission of inquiry on the Syrian Arab Republic, U.N. Doc. A/HRC/19/69 (22 February 2012). 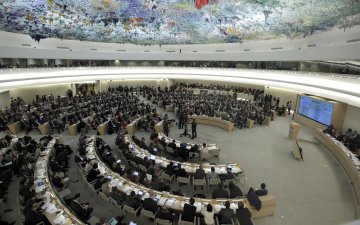 The Resolution was approved on March 1 by a vote of 37 in favor, 3 against, with three abstentions. The vote tally or breakdown was as follows:

Not voting, with explanation (absent from room)

Not Voting, without explanation

Obama: “We can’t stand on the sidelines” [but let me think it over while I have a latté]

Obama has reportedly vetoed a plan to take military action to set up a secure zone within Syria by the use of air power.  See  “Obama rules out military intervention in Syria, weighs humanitarian corridors,” DEBKAfile, February 29, 2012.

Secretary of State Hilary Clinton muses aloud, on camera, that if we call Al-Assad a war criminal, it may make it harder to get him to resign.  Well, he is a war criminal, and is committing war crimes and crimes against humanity as we speak.  The Nuremberg Charter was not about convenience.  The dilemma is real.  But that is no reason to hide in an Orwellian world in which the Secretary of State and the President are afraid to describe a horrific reality with real words.

How Many Will Die Before the International Community Stops Al-Assad–With Force if Required?

Meanwhile, United Nations Under Secretary General for Political Affairs, Lynn Pascoe, told the Security Council on Tuesday, February 28, that the U.N. now estimates that 7,500 civilians have died in Syria, up from 4,500 estimated in December.

The Urgency Is to Act Now, Today

Kofi Annan has been given a mandate to “mediate” with Al-Assad and others, and has demanded that his mediation process be the sole mediation process to resolve the dispute. This is a major mistake by U.N. Secretary General Ban Ki-Moon.  Annan’s mission should be limited to a week, in the initial phase. Other mediation efforts should continue.

Annan is no Richard Holbrooke with the full military might of the United States standing behind him, which enabled Holbrooke to broker a peace in Dayton with Milosovic in 1995, after three years of devastating war in the former Yugoslovia. Then, as now in Syria, the international community didn’t want to get involved militarily.

There is absolutely no reason to expect that Annan will succeed where the Arab League and the major Western and Arab powers failed. This is Al-Assad’s game, which he played masterfully with the Arab League sanctions, which were postponed as a result of his acceptance of their November peace plan and the Arab League observer mission, gaining months of time, for months of repression. He never complied with the peace plan’s terms, and in retrospect appears never to have intended to.

He wants more time,  more time to commit war crimes and crimes against humanity to eliminate his opponents in Homs, and everywhere else. He will always play for more time.  The question is, “When will the international community, led by the U.S. or France, tell him that his time is up?”

He should not be given more time. He should be stopped, by force if necessary.  In the next few days.

Obama must face the harsh realities in Syria. This is not a “kumbaya” moment in history.  The Russians are willing to play for time so Al-Assad can finish killing off the opposition.  They are providing munitions including weapons and ammunition, and probably intelligence, money and other support to assist him.

So, is the world helpless?  Must we simply stand by and watch the slaughter, and accept a future world where we are comfortable with the commission of war crimes and crimes against humanity, because we don’t have the will and the courage to use military force to stop it?

The civilized world has stopped crimes against humanity before, without Security Council authorization, in Kosovo and Serbia. It is now time to act, militarily, to stop Al-Assad. There is no imaginable scenario whereby he can remain in power with a license to hunt down and execute his opponents, without other outside powers being drawn into an ever-widening civil war and regional conflict.

Iran is watching.  This conflict is in important respects a conflict also with Iran. Obama has spoken of having all the options on the table with Iran if they don’t agree to stop the development of a nuclear weapons capability or nuclear weapons. He will have no credibility with Iran, and no credibility that he will in fact stop an Israeli attack on Iran’s nuclear facilities, if he does not show some decisiveness now. Netanyahu is coming to Washington next week, in all likelihood in an effort to get a green light to launch such an attack.  Things are not going to get any easier for Obama as time goes by.

Obama is known for his words, and the fact that they are frequently not backed up by actions. In fact, in foreign policy, he is seen by many as lacking leadership skills and “resolve”.

Netanyahu defied him early on with respect to settlements, and Obama backed down. Obama gave the Russians their greatest objective in arms control talks, by withdrawing plans to base defensive missiles in Poland and Czechoslovakia–and got nothing in return. He didn’t even tell the Poles and the Czechs in advance. He did nothing to support the Green Revolution in Iran in 2009, which subsequently was crushed–like the Syrian opposition will be crushed if there is no outside help. The Iranians are advising Al-Assad. He stood on the sidelines in Egypt when the Arab Spring arrived, and even cut back on support of civil society programs through foreign assistance in the years leading up to those events. He was opposed to getting involved in Libya for a long, long time, and only got involved when pushed to do so by the French and the Bristish. He oversaw the disastrous failure of American diplomacy in failing to negotiate a status of forces agreement with Iraq, leading to the precipitous withdrawal of the U.S. in a manner that puts the entire Iraqi enterprise in doubt. His policies in Afghanistan have manifestly failed. Above all, he lacks any strategic vision. He doesn’t see a connection between halting Al-Assad’s butchery in Syria and halting Iran’s drive to obtain nuclear weapons. Outsiders have serious doubts he can stand up to Netanyahu and prevent an Israeli attack on Iran. The list could go on.

Nonetheless, despite these weaknesses and shortcomings, he must act now to lead the civilized world in halting the commission of war crimes and crimes against humanity in Syria. He needs to put military action on the table as an option, and immediately take overt steps to put that option in place so that it can be executed on short notice.

It goes without saying that attacks on medical personnel and facilities, which constitute war crimes, must immediately halt.

Humanitarian assistance must be allowed, but it will have no durable meaning if Al-Assad’s onslaught against his own civilian population is not stopped now.

Munich II: The meeting in Geneva between the U.S., the EU, the Ukraine and Russia

President-elect Maurício Macri: Democracy in Latin America gets a boost from Argentina